There’s also a new HPC server to go with it IBM has launched a version of the Power8 processor that features Nvidia’s NVLink, a high-performance interconnect technology that sits between GPU and CPU.

The chip has been released as part of a new Power System server, the S822LC for High Performance Computing. This machine is being positioned as the perfect fit for demanding workloads in fields like deep learning, AI and advanced analytics.

Preparing for a revolution

Server-side GPU acceleration is a hot topic: earlier this year Nvidia launched Tesla P100, calling it “the most advanced data center GPU ever built’. Intel is pushing ahead with its Xeon Phi, claiming it is more than a match for Nvidia’s hardware, and AMD is steadily improving its FirePro range.

The parallel processing capabilities of GPUs are especially useful in artificial intelligence research, and analysts predict that the importance of such devices is only going to increase.
But most of this power will be wasted unless GPUs learn to exchange data with CPUs at faster speeds. For years, Nvidia has been working on a technology that could do just that, and it looks like NVLink is finally ready for action.

Nvidia’s technology has been integrated into IBM’s family of interconnect innovations collectively known as POWERAccel, which also includes Coherent Acceleration 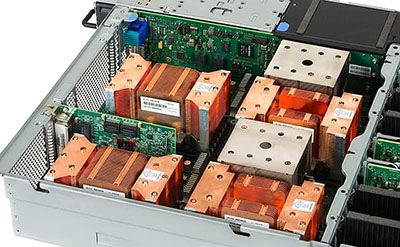 The Power System S822LC for High Performance Computing embeds NVLink at the silicon level and incorporates it into the overall system design. It’s a two-socket, 2U server that supports up to 20 CPU cores, along with up to four integrated NVIDIA Pascal GPUs, cooled with either air or water.

The server was developed in partnership with the OpenPower Foundation – a project that enables IBM to share the blueprints of its processors with the open source community, and counts Nvidia among its members.

“Based on OpenPower innovations from partners such as Nvidia, our new OpenPower Linux servers with PowerAccel set a new standard for these workloads compared with x86 processor-based servers,” said Doug Balog, general manager of Power, IBM Systems.

Several organizations have pre-tested early systems and already placed their orders. One of such customers is the US Department of Energy’s Oak Ridge National Laboratory (ORNL). The lab will use new servers as an early-generation test bed for applications intended to run on Summit, itsupcoming Power-based supercomputer that IBM and Nvidia will deliver in 2017.

“The NVLink technology on the POWER platform provides coherency among the multiple memory hierarchies in the CPUs and GPUs,” said Arthur S. (Buddy) Bland, OLCF project director at ORNL. “As a long-time user of GPUs, we believe that this will improve the performance of our applications and make it easier for the users to deliver great science.”

• Our Mission It is our mission to have the items our customers want, when they want them, at the most competitive prices. We know that being Your Profit Source ® is the key to our own success..

• PRODUCTION EQUIPMENT UK FENIX ALLIANCE LTD is a specialized trading company that supplies components for the development and implementation of projects for the automation of production processes, a wide range of machines and parts for CNC machines. Our goal is a satisfied client..

• Technological process automation: Our specialists will help to select equipment for various automated systems taking into account the production potential of the client’s facilities. Our main clients are engineers and technologists who introduce new automation tools, combining them with existing equipment, or who create technological lines «from scratch».

• UK FENIX ALLIANCE LTD guarantees and benefits: Our company works with manufacturers directly or through authorized dealers, therefore it guarantees high quality components, 100% authenticity, competitive prices and a full package of documents required by law. In addition, there are special price offers! Well-developed logistics and cooperation with the largest couriers allow thousands of our clients worldwide to receive their orders in the shortest possible time.